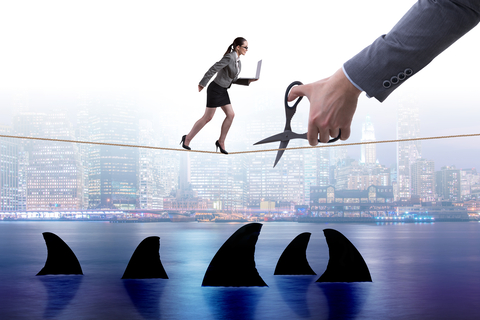 No, this is not another addition to the countless, a few of them actually useful, books / articles etc on financial risk management. This is about a topic that should be close to every risk manager’s heart but so rarely is the case. I am referring to the risk management of the career options, consider them puts, that a risk manger sells to the institution that hires them. These puts can be exercised against said risk manager at any given time. Of course, there is premium, in the form of salary, bonus etc, but there is always the risk of the option that you have sold being exercised against you, normally with maximum prejudice. For a recent example, consider the career trajectory of the recently defenestrated Chief Risk Officer at Credit Suisse. No-one likes to think of one’s job / career in such a manner, it seems vaguely unedifying. However, as a model it is of some value in identifying potential issues, before they arise.
The overall analysis I will present should apply generally, but as I work primarily in the ManCo space, I will make direct reference to that environment. The underlying asset can be best described as the risk / regulatory risk health of the organisation for which you are working. You may assume that for the purposes of this analogy you are short a put and further that the forward price of the underlying is lower than the current price. This may be depressing but it is almost certainly accurate. From a risk perspective, if the business is growing, that implies more and greater potential issues about which you will have to be worried, it also involves greater delegation and its accompanying agency issues. If the business is not growing, whatever the reasons, they will undoubtedly impact negatively on the performance of the risk area. If you have a regulatory hat, things get worse because of the seemingly inevitable increase of legislation, about which you have to be concerned. It is a classic case of having to run faster to stay in the same place, and still keeping a close eye on the neighbourhood.
Next, we need to define the option. Not trivial but it is helpful to lay out parameters that allow the risk manager to understand where their career deltas tend to be negative and increasing and their career gamma is positive and increasing at the same point.  First off, we need a strike. It is where risks for which the risk manager has oversight go wrong either in single large cases or in multiple smaller ones. As such, it is important to group the risks in terms of complexity, co-complexity and impact. By co-complexity I mean if something is going wrong in one fund, what is the likelihood of something similar happening in other funds under your remit. This requires a considerable amount of inter-fund time-series analysis and a considerable understanding of the underlying risk-processes in the funds. Whilst the above is not trivial to determine, it should be possible to understand the parameters of when, not if, you are going to be thrown under the bus by your organisation due to events in those funds for which you have responsibility.
Of course, if you have the signal honour to hold a regulated position, such as Designated Person (DP) in Ireland or Conducting Officer (OC) in Luxembourg, kudos by the way, the dimensions of the strike have become a lot more complicated.  Firstly, the combined legislation and guidance is large and not necessarily crystal clear nor completely consistent. Funds may be well managed from a financial risk management perspective and be a complete disaster from a regulatory perspective. So now there are a range of strikes, some of them overlapping some of them isolated, all of them relevant. In addition, the number of folk who may try to exercise the option has increased. This is not a trivial concern.
Once you have a strike, you need a time to expiry. I cannot express this firmly enough, you are short an American option. Best case Asian, with quarterly observation. Either way this is never a long-dated option. You may work on the hope that it will not exercise in the short time, but it is better to work on the expectation that it will.
So that is the career option which all risk managers are effectively short to the organisation that employs them. I would stress again that this is a model with useful characteristics although that could be said of pretty much all risk management tools. This is just, potentially, a bit more personal.
It is incomplete insofar as I have left out interest rates (actions to improve your situation) and volatility, but that will be the subject of a subsequent note.