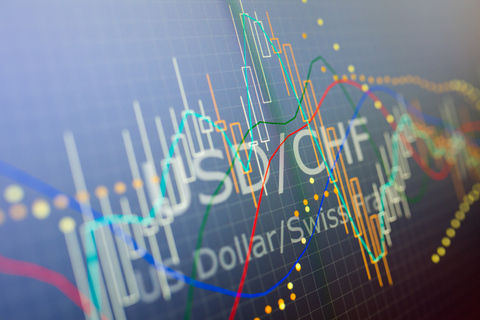 The existence of non-base currency share classes in funds mean that the holders of units of such share classes are exposed to the risk of the underlying assets and to the risk of the FX rate between the base currency and the currency of the share class. Regulations allow that this FX be hedged using specific instruments where the returns of such instruments are allocated solely to the share class that they are meant to be hedging and not to the fund as a whole. Almost exclusively, this hedging is carried out using forward FX trades.

Consider the example where the base currency of a fund is in GBP and it has a USD share class. When an investment is made in the USD share class, this dollar amount is converted directly in GBP at the spot FX rate, and the resulting sterling is used to buy units of the fund. At the end of the month, for example, the value of the units, in GBP, is converted into USD, at the then prevailing FX rate, and these dollars are used to determine the returns of the USD share class. In order to FX hedge the share class, at the same time as the investment was made, the manager would sell the converted amount of GBP versus USD at a forward date. This would effectively hedge the original investment.

In the event that the fund rises or loses value over the period of the hedge this may require re-hedging to take place. That is, if the fund raises in value, the manager will have to sell GBP vs USD forward to take account of the increased exposure to GBP. Similarly, if the FX rate changes, a re-hedge may be necessary, as the profit / loss on the FX hedge will itself need to be hedged. This is in line with the concept that profit or loss on the hedge is effectively the same as a subscription or redemption in the share class (in terms of the base currency of the fund).

With regards to UCITS fund the trigger levels for each share class has been set at a new FX exposure of +/- 5%[1] with the proximity alert levels at +/- 4%. Typically using administrator position data, there is an added level of complexity insofar as the position and NAV data for each fund is generally only available on a T+1 or a T+2 basis.

The functionality described below is available for the appropriate user-id / password combination on the RiskSystem website. The functionality is generally found in the Monitor Section – Risk/Compliance Summary subsection. The screens may be accessed from the dropdown menu.

[1] This can be customised to the user’s requirements

An example of the overall screen is shown below but the individual components will be considered separately. 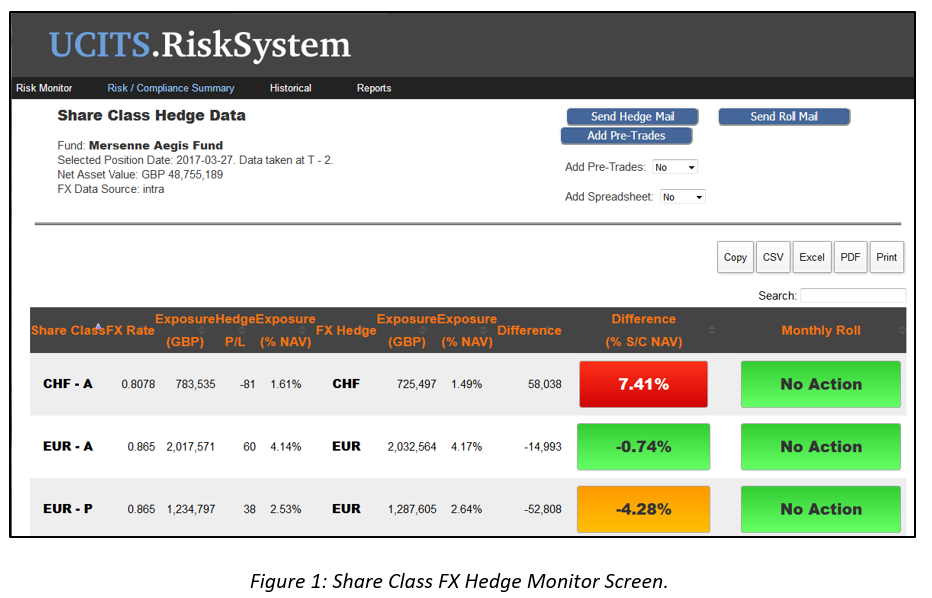 Information on the basic data that was used to generate this screen is given in the upper left hand side, figure 2. Below the name, the selected position date shows the date of the data that was last updated in the system. Typically this is one or two business days before the present date. The Net Asset Value reflects that of the administrator. The FX Data source has two possible values – “inter” or “intra” and it refers to interday or intraday FX pricing. If “inter” is displayed the “live” FX rate used in the calculation will be that of the previous days close and it will not change during the day. If “intra” is selected the used FX rate will update to market levels on an hourly basis. To toggle between the two, a change must be made in the Preferences sub-section of the Market Risk section.

An example of the hedge data screen is shown in figure 3. The columns will be explained in turn.

Exposure (Base Currency): This is the amount, in the base currency of the fund that is allocated to the specific share class. It is calculated by firstly taking the value of the Share Class, in the currency of the share class as determined by the administrator, and converting it to the base currency of the fund, at the close FX rate on the selected position date. The P/L of any hedges of the share class, converted to the base currency at the live FX rate is added to the original number. The P/L of the FX hedges is calculated using the difference between the selected position date FX rate and the live FX rate. This assumes that any P/L of the FX hedges up to the selected Position Date have already been included in the value of the Share Class by the administrator.

FX Hedge: This is the local currency of the share class.

Exposure (% NAV): This is the FX Hedge Exposure expressed as a percentage of the NAV of the fund.

Difference (% S/C NAV): This is the Difference, expressed as a percentage of the NAV of the Share class. This is the primary monitoring tool. If it has a value between -4% and 4%, the button is green. If it has a value between -5% to -4% or 4% to 5% is will be amber. For a value less than -5% or greater than +5% I will be red. If you mouse-over the button, it will suggest the FX trade that, if executed, will bring the back to being exactly hedged.

There are a set of actions that can be used using the screen, figure 4. By clicking on the “Send Hedge Mail” button, an email will be sent outlining the current state of the hedges for all share classes. In the event that a button is amber or red, additional information will be given on an appropriate hedge trade that should eliminate the mis-hedge.

In the event that hedge trades will be executed, these need to be added to the position database immediately as they will only appear as a position from the administrator the next day. It is possible to add “pre-trade” positions that reflect the fact that hedge trades have been executed, but are not yet in the administrator position file. Changing the Add Pre-Trades dropdown to “yes” means than when the hedge mail is sent out, a set of appropriate FX forward trades, with position zero are added to the position database. When the trades have been executed and the sizes confirmed, the position sizes can be edited in the Pre-Trade Position Edit screen. These pre-trades will be maintained in the position database until the actual positions are loaded.

As regards the Add Spreadsheet toggle in the event of it being “yes”, a spreadsheet outlining the appropriate trades, in a specified format, will be attached to the email, as and when it is sent.

Please contact us at info@risksystem if you have an interest in discussing this functionality.